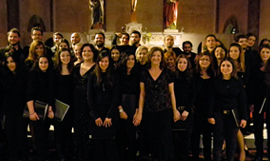 The Mixed Choir of the European University Cyprus comprises of music students, other university students and community members who enjoy the experience of singing in a choir. It is the largest university ensemble, under the direction of Mrs Maro Skordi, a renowned choir director and conductor. Besides presenting two concerts per year, the mission of the choir is to participate at choral competitions and other voluntary, fundraising community events at different locations. Thus, the choir’s music repertory extends from renaissance music to byzantine chants, songs from musicals, spirituals and gospel music as well as contemporary music. Among its future endeavours is the performance of Orff’s Christmas Oratorio. 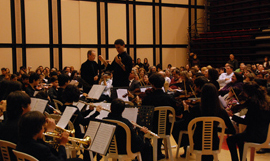 The Symphonic Band of Strovolos Municipality – European University Cyprus was established in the spring of 2007 with the signing of a bilateral agreement between Strovolos Municipality and European University Cyprus (i.e., Cyprus College). The band is administered by a six-member board, and it has as its goals to promote a high level of musical participation and involvement, to provide valuable opportunities for youth through their participation in a large musical ensemble, to contribute to the artistic and cultural development and advancement within the university, the city of Strovolos and Cyprus in general, to encourage and promote the repertoire for symphonic bands and, finally, to contribute towards the creation and advancement of a Cypriot and Greek repertoire for such an ensemble. The band appears at two regular performances at the Strovolos Municipal Theatre, the Christmas concert in December and the Spring Concert in May. Additionally, as part of its social and cultural mission, the band gave performances for the International Day of Music, the Association of Cancer Patients and Friends, the Association Against Domestic Violence, the Doctors Without Frontiers (Cyprus), the School of the Blind, as well as for the Nicosia Municipality, the Cyprus Tourism Organization, the Paralimni Municipality and the University of Monday. Overall, it has given more than 40 performances and has collaborated closely with the Cyprus Police Band. Its upcoming plans include a performance in Europe and the recording of a CD with diverse repertoire. The twenty-five member band is comprised of students and teachers of the music program of the European University Cyprus as well as other members of diverse age and profession who have a middle or high level of musical ability at a wind or percussion instrument. New members are accepted by audition. Dr. Yiannis Miralis is conductor and artistic director of the band. 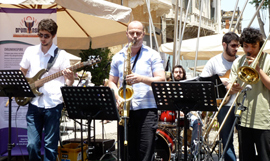 The EUC Jazz and Pop/Rock ensembles are offered every semester to music students of EUC. In these classes, the students have the opportunity to gain hands-on experience by performing a variety of music every week under the instruction of their teacher. Here they will learn all the necessary tricks of the trade that they will need to become accomplished performers in the real world of music after they graduate. The instrumentation usually includes drums, bass, rhythm and lead guitar, piano/keyboards, vocals and a variety of wind instruments (saxophone, trumpet, trombone, etc). The ensembles cover a variety of styles of contemporary music, including jazz, fusion, funk, pop, rock and vocal music. Students are often encouraged to bring their own music to perform in class. Concerts and TV appearances are often scheduled at the end of the semester, offering students the opportunity to perform in professional venues.

Students frequently form new ensembles during their studies at EUC, and they can enroll for up to three semesters in a chamber music ensemble. There are no limitations regarding the instrumentation, and there are currently guitar, vocal, keyboard as well as mixed ensembles. Students have the opportunity to learn substantial new chamber ensemble repertoire and become acquainted with the current practices in the area of chamber music through individual instrumental development and ensemble playing. The students learn to incorporate appropriate blend and balance within the ensemble and learn to apply principles of phrasing, articulation, dynamics and expression in a chamber music setting and integrate principles and ideas regarding ensemble practice. The University provides several performance opportunities to student chamber music ensembles not only within the University setting but also within the community with frequent faculty/student collaboration.