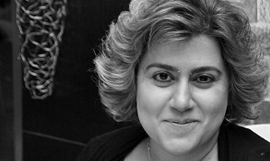 holds a doctorate degree in Historical Musicology from the School of Music at the University of Sheffield, United Kingdom. She began her studies at Wittenberg University, Ohio, United States, and earned a Bachelor in Music in Piano and Oboe Performance. During her studies in the States, she gave several recitals and participated as a finalist and earned prizes at international piano competitions. She continued her postgraduate studies in Sheffield, United Kingdom, concentrating initially on piano performance and later on historical musicology. Upon her return to Cyprus, she worked for a year as a lecturer at the Department of Music, Intercollege. In 2007 she was appointed Lecturer at the Department of Arts, European University Cyprus. She served as the Co-coordinator of the Music Program, and from 2010 onwards, she is serving as Chair of the Department. Her research interests include Western composers of the first half of the twentieth century, Greek and Greek-Cypriot composers. More specifically, she focuses on revised compositions, and issues that relate to the revising process, such as creativity, politics and methodologies. Georgia has presented her work in international conferences and published relevant papers in journals.