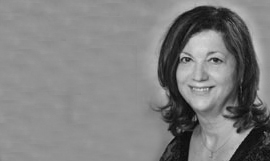 had her first piano lessons with Dimitris Tirimo and obtained the Harmony Certificate from the Ethnikon Odeion of Cyprus under Yiangos Michaelides. She studied Music at the Royal Scottish Academy of Music and Drama (D.R.S.A.M.) where she won the Euing prize in History, Form and Analysis. She continued with studies at the Jordanhill College of Education. She then obtained a Master of Arts in Education (Professional Studies), Institute of Education, University of London (with Dr Keith Swanwick on “The Theory and Practice of a Multidisciplinary Approach in the Secondary School Music Curriculum”). She worked as Music Teacher and Assistant Headmaster in Secondary Education at the Pedagogical Academy of Cyprus (1985-1986), the Department of Education of the University of Cyprus (1996-97, 1997-98), the Curriculum Development (1983-1987), the Cyprus Pedagogical Institute (1986-1992), the Cultural Services (1999-2000), as Music Inspector in Secondary Education (2000-2007) and as Chief Officer of Education at the Ministry of Education and Culture (2007-2008). She has taught ‘Music in Secondary Education’ (University of Nicosia, 2008-2009) and is currently teaching in the European University Cyprus (since 2010). Maro Skordi has been president of various committees and member of jury committees in choral/song competitions in Cyprus and abroad and member of the jury in the International Eisteddfodd Llangollen, Wales (1998, 1999). She worked for the New Curricula of the Ministry of Education and Culture (1990, 2000-2007) and taught the chorus for productions of the Cyprus Theatre Organisation (1993-2011). She has given music seminars and workshops all over Cyprus (since 1986) and organized multidisciplinary projects in schools of primary and secondary Education in collaboration with Cypriot composers, artists and societies. She has actively participated in conferences on Education in Cyprus and abroad. She was accompanist to choirs and soloists in concerts and conductor of the Choir of the University of Cyprus (1996-1998) and the Hellenic College of Music Children’s Choir (1997-2004). Today she conducts the Choir “Leandros Sitaros” of Pnevmatiki Stegi, Nicosia (since 1984), the “Polyfonia” Chamber Choir (since 2003) and the European University Cyprus Choir (since 2010). She was editor and co-writer of books (Ministry of Education and Culture) and writer of ‘Do, Re, Mi, Fa, Sol…’. I start on a Musical Journey’ (2010). As Inspector of Music in Secondary Education, Ms Skordi organized the first participation of Cyprus in the Panellenian Musical Games (2006) and implemented educational innovations in Cyprus, such as: the educational concerts and the Music Competition of the Pharos Trust, the Outreach Educational Programmes, projects with the collaboration of schools and Cypriot composers and ‘Family Concerts’ of the Cyprus State Orchestra, ‘Artists in schools’, ‘Educational Concerts’ and ‘District Choirs and Orchestras’. She also set up the first Music Lyceums in Cyprus (2006).