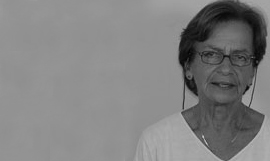 Katy Romanou is a PhD in Musicology from the Music Department of the National and Capodistrian University of Athens. She has a M.M. in Musicology from Indiana University in Bloomington, IN. She was a faculty member in the Music Department of the University of Athens. She is a researcher of recent Greek art music and its interactions with neighbouring cultures and has conducted a number of research projects funded by the Research Committee of the University of Athens and the Greek State’s General Secretary of Research and Technology. At present, she is investigating the history of music in Cyprus. Katy Romanou is coordinator of the Greek team of RIPM (Répertoire International des Sources Musicales/ Retrospective Index of Music Periodicals).

She has published widely in Greek and foreign periodicals and collective editions, among which, most recently: “Exchanging Rings under dictatorships”, in Music and Dictatorship in Europe and Latin America, edited by R. Illiano and M. Sala, Turnhout, Brepols Publishers, 2009, pp. 27-64, and (with Maria Barbaki), “Music Education in Nineteenth-Century Greece; its institutions and their Contribution to Urban Musical Life”, in Nineteenth Century Music Review, 8 (2011), pp.55-82. Her recent books are: Entechne Hellenike Musike stous Neoterous Chronous [Art Greek Music in Recent Times] (Athens 2006); Serbian and Greek Art Music. A Patch to Western Music History (Bristol & Chicago, 2009); and a translation of Chrysanthos of Madytos, Great Theory of Music (New York, 2010). Katy Romanou is member of the editorial board of the Greek peer reviewed periodical Musicologia, published in Athens.