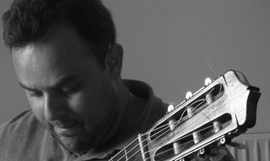 Evis Sammoutis’ works have been commissioned by festivals and organizations such as the Venice Biennale, Klangspuren, Royaumont, the Royal Philharmonic Society, Athens Concert Hall, the Barlow Endowment and ARD and performed in more than 30 countries around the world at venues and festivals such as the Purcell Room, Konzerthaus Berlin, MusicNOW, Gaudeamus Music Week, BachFest in Leipzig, Transart and the ISCM Festivals. His works have also been broadcast on many international radio stations such as BBC Radio 3 (United Kingdom), Deutschlandradio, SWR2, Deutsche Welle and ARD (Germany), Rai 3 (Italy), RTP (Portugal) and KBS1 (South Korea).

Performers include the Ensemble Modern, Les Percussions de Strasbourg, the Philharmonia Orchestra, the London Symphony Orchestra, the Kreutzer Quartet, Irvine Arditti and Rohan de Saram and conductors include Frank Ollu, Elgar Howarth, Kasper de Roo and Christoph Poppen, to name a few. He has been awarded over 35 scholarships, fellowships, residencies, awards and prizes at many international competitions, including the Royal Philharmonic Society Award, the 5th Jurgenson International Competition, the Irino Prize, the Andres Segovia Prize and the 5th Concours Dutilleux, and he was also a finalist for the International Gaudeamus Prize on three occasions (2004, 2007 and 2009). Sammoutis spent much of 2009 in Weimar, Germany as recipient of the Franz Liszt Scholarship and in the USA as a Fulbright Scholar of Advanced Research at Boston University.

Sammoutis holds a PhD in Music Composition from the University of York where he studied with Thomas Simaku. He also studied at IRCAM, Darmstadt, Voix Nouvelles and Tanglewood as a composition fellow and had master-classes with some of the most distinguished composers of our time.

Prior to his EUC appointment, he also taught composition, orchestration and guitar performance at York, Nottingham and Hull Universities.

For more information about the composer, please visit: http://www.evissammoutis.com